Welcome to All Sensors “Put the Pressure on Us” blog. This blog brings out pressure sensor aspects in a variety of applications inspired by headlines, consumer and industry requirements, market research, government activities, and you.

In discussions about renewable energy, especially non-technical discussions, one of the key aspects is usually forgotten: the need for batteries – a lot of batteries.  In real world systems, batteries must store the surplus energy generated when the sun shines and the wind blows for use when they do not. While there is ongoing research into different battery chemistries, today’s most common battery for renewable energy systems, especially off-grid solar power systems, is a variation of the venerable lead-acid design commonly used in cars. These batteries provide backup power today for medical telecommunication, utility, security and other applications where a power disruption would cause major problems.

The most advanced types use a valve-regulated lead-acid (VRLA) design, for wet cell (flooded), gel and absorbed glass mat (AGM) technologies. Since they are sealed, the hydrogen generated from the negative plate and the oxygen generated from the positive plate must be regulated to avoid being lost to the atmosphere. This is accomplished through an internal self-sealing safety vent that is typically in the 3 to 10 psi range. While the regulation does not require pressure sensors in the application, pressure sensors are used in the research and development phase to verify that the design will work as promised in a variety of conditions for their design life of 20 years at 25°C. 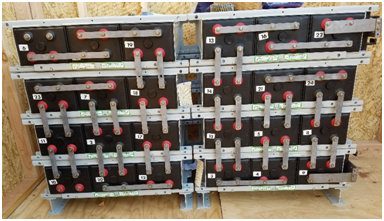 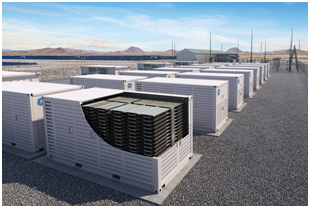 Comments/Questions?
Do you have a pressure sensing question? Let us know and we’ll address it in an upcoming blog.
Email us at info@allsensors.com

Welcome to All Sensors “Put the Pressure on Us” blog. This blog brings out pressure sensor aspects in a variety of applications inspired by headlines, consumer and industry requirements, market research, government activities and you. In this blog we’ll discuss wind pressure and the effect it has on buildings .

The forces of nature are beneficial but they can also cause problems. Wind, for example, provides a clean source of power when windfarms are installed in the right place – locations that consistently experience sustained winds sufficient to generate kilowatts of power. In contrast, wind hitting a tall building can cause serious problems.

When wind blows against a tall building, it can either go up, around or down. When it goes down, it’s called the downwash effect. 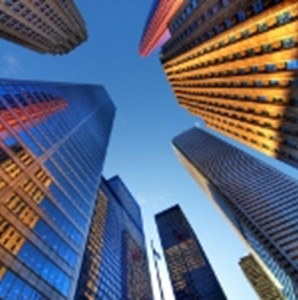 One company, CPP Wind was founded over 34 years ago to perform wind tunnel analysis on buildings and structures.

According to Bob Fallbeck, Director of Marketing & Business Development at CPP Wind, “A lot of it comes straight down the building and can make pedestrian levels and lounging areas around the building very uncomfortable and, in some cases, dangerous.”

“One of the little known facts is that those awnings that are over the entry ways of a lot of tall buildings are not there to keep the rain off, although that is a side benefit,” says Fallbeck. “They’re primarily there to keep the wind off.”

Leeds’ Bridgewater Place is a recent example of how downwash winds can turn deadly. In 2011, high winds blew a lorry over and killed a pedestrian. A coroner blamed high winds as the cause of his death.

Another even more recent example is a 38-floor structure in London that has been dubbed the “death ray” building. It initially had a problem with intense reflected sunlight. That problem was addressed only to create a problem with wind.

CPP works with architects and engineers in the design phase to prevent wind-related problems. When they were not part of the initial design team, CPP can help mitigate preexisting problems. While physical modeling plays a strong role in many projects, it is not the company’s only tool.

“We have computer simulation capabilities but in many cases, for the kind of information you want and the complexity of the urban environment, physical modeling in the wind tunnel is just not ready to be replaced by computers,” says Fallbeck. “We can get a lot more information for a lot less money through wind tunnel testing than if we had to do a full computer simulation. Tunnels are still a state of the art tool for many, many cases.”

Pitot tubes in the tunnel verify the created wind profile. “We have to make sure that we are creating the right kind of wind at scale to replicate what we see in the real world,” says Fallbeck.

“We also use pressure taps in each of our models to find the wind pressures on the outside of a building to help with the cladding and structural design,” explains Fallbeck.

In a typical or standard wind tunnel test as many as 500 to 600 pressure sensors can be used and the 200 to 400 pressure points can be read simultaneously.

“We have the capability to do up to 1020 pressure sensors,” says Fallbeck.

Pressure transducers in the ±5 inH2O range are used for the measurements and calibrated to report both positive and negative pressures. 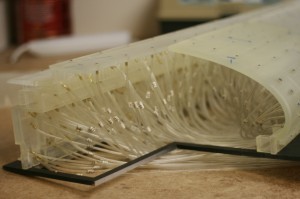 A section of a building model being prepared for wind tunnel testing at CPP. Pressure taps in the surface of the model connect to tubing that feeds into pressure transducers. Courtesy of CPP Wind.

“We get kind of a wind map across the surface of the building that tells us exactly how much pressure is being exerted at any given point,” explains Fallbeck.  “A brass tap connects to a tube that feeds into the transducer and our system reads the pressure created by the wind on the surface of the model.”

This testing helps the cladding engineer keep the building as efficient and resilient as possible and significantly reduce construction costs. Cladding engineers address the outside skin of a building particularly if it is glass. The tests also help the structural engineers to use their materials efficiently and effectively.

Analysis that addresses wind at the base of the building to minimize ground level effects on pedestrians is another matter.

“We had to invent something in order read pressures away from the building’s surface,” explains Fallbeck. “We have our own proprietary pressure probe—the CPP Probe—that we use for those kinds of tests that takes pressure from six different directions simultaneously.”

The proprietary probe is a tool that is used in the wind tunnel as well. A combination of site analysis, architectural drawings, Google Earth, and photographs allows CPP Wind engineers to determine the features that interact with the wind.

“We look at the wind environment using local anemometers so we can see what the meteorology is there, what kind of wind conditions exist, and how the winds will affect and be affected by the buildings and terrain in that area,” says Fallbeck.

Using that information, CPP Wind can verify that a pedestrian wind problem could occur or does exist and determine how to mitigate it.

Pressure sensors are an integral part of several types of wind tunnel analysis that CPP performs.

What do you think/Comments?
Do you have a pressure sensing question? Let me know and I’ll address it in an upcoming blog.
-Han Mai, Senior Marketing Specialist, All Sensors Corporation (hmai@allsensors.com)