Welcome to All Sensors “Put the Pressure on Us” blog. This blog brings out pressure sensor aspects in a variety of applications inspired by headlines, consumer and industry requirements, market research, government activities, and you.

Inside a can of Guinness and a few other beers, a plastic widget releases pressure when the can is opened and exposed to atmospheric pressure. While the process is explained briefly and to the extent that a typical beer drinker cares to know on the can, there are a few other compelling technical aspects that someone involved with or interested in pressure sensing might want to know.

For one, the widget is a patented approach to solving a problem that a canned stout beer, like Guinness, has compared to typical lager or lighter beer or ale. For the later types, carbonating the beer with carbon dioxide (CO2) is sufficient to give the beer its expected head when the beer is poured. In contrast, Guinness and some other beers are expected to have a smoother head. With a widget in the can, these beers have the desired, much creamier, longer lasting head that the draft version has.

The 3-cm diameter widget looks like a ping pong ball but it has a laser-drilled, 0.61-mm pinhole in it. In the canning process, in addition to filling the with CO2 and nitrogen (N2) supersaturated stout, liquid N is added to the stout at the end. The liquid N boils off during pasteurization, the top of the can pressurizes and forces the stout into the pod until equilibrium is reached at about 25 psi. 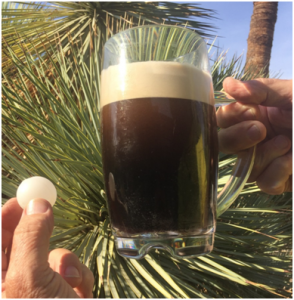 When the can is opened, the pressure is released and the small amount of beer in the cavity rapidly escapes through the pinhole providing sufficient agitation to reproduce the tap handle character for the beer. Enough of the technical stuff. It’s time to verify the results.

Comments/Questions?
Do you have a pressure sensing question? Let us know and we’ll address it in an upcoming blog.
Email us at info@allsensors.com